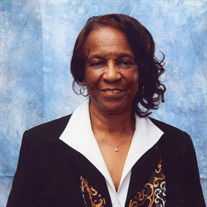 Annie Lee Williams Moody born on February 22, 1941 to the late Leroy Williams and Irene Jackson Williams. She was affectionately known as “Ann.” She was the third of seven children. The family resided in Enfield, North Carolina, where close family ties were created and paramount. Annie was preceded in death by her parents, Leroy and Irene Williams, brothers, Walter Lindberg Williams (Elzera), Altonberg Williams, Curtis Williams, and Donald Williams. As a young adult, Ann was formerly married to the late LeVerna Moody. Ann attended Nash County Public Schools and graduated from Nash Central High School. After graduation, Ann was employed with Abbott Laboratories pharmaceutical company as a Quality Assurance Coordinator. She was dedicated and committed to her profession, earning the respect and admiration of her colleagues and peers. Ann retired from Abbott Laboratories in Rocky Mount, NC after 35 years of service. Ann had many loves in life with God being the first and greatest. She loved spending time with family and friends. Ann enjoyed traveling, yet her most reflective time was spent at the beach where she would sit on the balcony listening to the waves and enjoying God’s creations. Ann was an avid sports fan. Her favorite football team was the Dallas Cowboys. She enjoyed rooting for her team and when there was a win she would certainly let you know! Ann became a member of Swift Creek Missionary Baptist Church as a young adult and possessed a firm faith in God. It was that faith that gave her strength. Ann had the heart of a servant and enjoyed being a faithful usher and gatekeeper in the house of the Lord. She greeted everyone with a smile and a willingness to do what she could for their comfort - from greeting, to seating, or providing bottled water. She was honored to serve our heavenly father in His house! Ann leaves to mourn her passing, her precious children, daughters Donnie Alston (Wayne) of Fuquay-Varina, NC, Jerrie Moody of Accokeek, MD and son, Jyronn Moody (Sheila) of Durham, NC; beloved grandchildren, Ashley Alston of Columbia, MD, Allison Alston of Beltsville, MD, Donté Taylor of Durham, NC, Shané Brooks (Robert) of District Heights, MD, and Jyronn Moody, Jr of Durham, NC; 2 adorable great-grandchildren, Robert Brooks Jr and Niaira Brooks of District Heights, MD; a brother, Leroy Williams, Jr (Celeste) of Fort Washington, MD, a sister, Andonia Harrison (George) of Anchorage, AK; sisters-in-law, Bettie Williams and Myrtle Williams of Anchorage, AK, Glynda Williams of Belcamp, MD, other sisters-in-law, brothers-in-law, nieces, nephews, cousins, extended family and friends. Visitation with family and friends will be Saturday, May 8, 2021 from 10:30-11:00AM with a Celebration of Annie's life will follow at 11:00AM in the Chapel of Cornerstone Funeral Home.

Annie Lee Williams Moody born on February 22, 1941 to the late Leroy Williams and Irene Jackson Williams. She was affectionately known as &#8220;Ann.&#8221; She was the third of seven children. The family resided in Enfield, North Carolina,... View Obituary & Service Information

The family of Annie Lee Williams Moody created this Life Tributes page to make it easy to share your memories.

Send flowers to the Moody family.