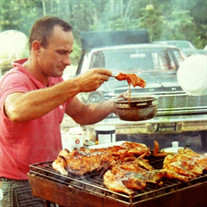 Carl was born on 12/30/1928 to Guy and Agnes Matthews of Nashville NC. He was married to Blanche Adgerneen Matthews for a wonderful 67 years. Carl was preceded in death by his loving wife Adgerneen, parents Guy and Agnes, and brothers, Bobbie Lee Matthews and Colin Matthews. He is survived by his siblings, Nell Killette, and Larry Matthews of Nashville. Carl and Adgerneen had 5 children, 8 grandchildren and 8 great grandchildren. Children include Gennie Bose and husband Carl of Pittsboro, NC, Mike Matthews and wife Terry of Dallas, NC, Lisa Bunting and husband Frankie of Greenville, Brent Matthews of the home, and Chris Matthews and wife Joyce of Beaufort, NC. Grandchildren include, Anna Allen and Sam Hershey of Raleigh, Michael Matthews and wife Nabaruna of Morrisville, Ryan Matthews and wife Sarah of Charlotte, Morgan Hobgood and Keith Smith of Greenville, Ashley Bunting and husband Lin of Greenville, Olivia Matthews of Plymouth, Luke Matthews and wife Summer of Greenville, and Logan Matthews and fiance’ Morgan Bunn of Williamston. Great-grandchildren include Samuel Hershey; Adam and Ethan Matthews; Jaxson and Jase Smith; and Landon, Braxton and Brooke Bunting. Carl and Adgerneen were married on October 25th 1950. They started building their life together in Nashville NC where he worked on the family farm and for the Nash County school bus garage. In 1964 they moved their family to Plymouth NC where Carl was the Supervisor of Transportation for Washington County Schools until he retired in 1983. Carl was an amazing mechanic. There was nothing he couldn’t fix. He loved to work on cars, work in his garden and yard, he was a master at grilling, and in his spare time he loved to take his wife fishing. Carl was ever loyal to his family and friends. Carl was so proud of his children and grandchildren. There was no brighter smile than the one he wore while teaching his grandchildren life skills or watching them participate in various activities. While Carl held many titles in his lifetime, there was none he wore more proudly than Grandpa! He will be missed by all who knew and loved him. He has left a mark on the hearts of many. Many thanks to the staff of Chatham Ridge for their excellent care. Graveside service will be held Saturday, May 8, 2021 at 2:30 PM, Mount Zion OFWB Church with Rev. Heyworth Watford officiating.

Carl was born on 12/30/1928 to Guy and Agnes Matthews of Nashville NC. He was married to Blanche Adgerneen Matthews for a wonderful 67 years. Carl was preceded in death by his loving wife Adgerneen, parents Guy and Agnes, and brothers, Bobbie... View Obituary & Service Information

The family of Carl Lewis Matthews created this Life Tributes page to make it easy to share your memories.

Send flowers to the Matthews family.