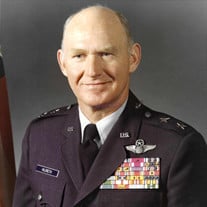 James Robert “Cotton” Hildreth, Major General, USAF (Ret) James Robert “Cotton” Hildreth, 94, passed away peacefully at his home in Spring Hope, NC Tuesday, February 1, 2022 with family by his side. A memorial service will be announced later. Cotton was born May 4, 1927 in Pine Bluff, Arkansas during the Great Mississippi River flood when the Arkansas River crested at 55 feet above flood stage. He was born in the back of an ice wagon because of the flooding and rode that crest of high water through an extraordinary life: He married Beth Baker of Spring Hope, a teacher and beauty queen, served in two wars, flew in the Air Force as a highly decorated fighter pilot, rose to the rank of Major General, owned and operated a seed store in Spring Hope, remained married to Beth for 66 years, had 5 children, 14 grandchildren and 8 great grandchildren in a full, active and meaningful life. Prior to his Air Force career Cotton was a teenaged merchant marine in World War Two, crewing on the last ship in the last wartime convoy to enter New York harbor. After a brief post war stint with the Army, he attended Louisiana Tech University. At Tech he played football for Hall of Fame coach Joe Aillet, with whom he maintained a lifetime friendship. While in college Cotton joined the Air Force ROTC, receiving his commission in 1952. Cotton’s Air Force career began after completing flight school in 1953 as a Flight Commander in Korea and continued with assignments in New Mexico, Germany and the Pentagon. In 1967 he became Commander of the 1st Air Commando Squadron in Pleiku, South Vietnam flying the prop driven A-1 Skyraider. Cotton flew 285 combat missions during his year-long deployment. He received numerous commendations for his service including the Distinguished Service Medal, Silver Star, Distinguished Flying Cross with two Oak Leaf clusters, the Legion of Merit with 2 Oak Leaf Clusters, the Bronze Star, Air Medal with 13 Oak Leaf clusters and a Purple Heart. Cotton continued to rise in the the ranks through assignments including Commander of 13th Air Force Advanced Echelon in Thailand, Commander of the Tactical Fighter Weapons Center at Nellis AFB and capped his career as Commander of the 13th Air Force at Clark AFB, Philippines. He retired from the Air Force in 1981. After retirement Cotton and Beth moved to her childhood home in Spring Hope. In Spring Hope he revived a shuttered legacy business known as Sykes Seed Store. He operated the store for 4 years selling everything from seeds, plants and hams to skillets, cane poles and stained glass. His final project, a labor of love, was to build and maintain, practically single handed, a family retreat outside of Spring Hope. He spent many happy times there entertaining friends and family and sharing his love of fishing with his grandchildren and great grandchildren. While Cotton was not a perfect man and made his share of mistakes, he always exhibited humbleness about his achievements, displayed unwavering commitment to his responsibilities and had great pride in his work. He continued to grow in love and affection for his wife and family, maintained a mischievous sense of humor, and respected people from all walks of life and from every corner of the globe. Cotton always thought for himself, was varied in his interests and was generous with all he had. Cotton is survived by his devoted wife of 66 years, Beth Baker Hildreth of Spring Hope, NC; his children, John (Barbara) of Charleston, SC, Reid (Wanda) of Spring Hope, Margaret Frye (Wes) of Canton, GA, Mark (Nancy) of Cameron, NC and Amy Hart (Philip van Kampen) of Burlington, NC; his sister Lois Hildreth Johnson of Pine Bluff, AR; fourteen grandchildren, eight great grandchildren and numerous nieces and nephews. A memorial service is planned for later in the year. The family requests that in lieu of flowers, memorials may be made in Cotton’s name to Gibson Memorial Methodist Church, 202 East Branch Street, Spring Hope, NC 27882. Cremation services were handled by Cornerstone Funeral Home of Nashville, NC. A gallery of photographs for Cotton can be found at their web site: https://www.cornerstonefuneralhomeandcremations.com Cotton’s detailed service record can be found on his Wikipedia page: https://en.m.wikipedia.org/wiki/James_R._Hildreth Audio of an Oral History Interview with Cotton for the Nash County Cultural Center can be found here: https://lib.digitalnc.org/record/76?ln=en#c=0&m=0&s=0&cv=0&r=0&xywh=-2952%2C-72%2C8861%2C4752

The family of James Robert Hildreth created this Life Tributes page to make it easy to share your memories.

Send flowers to the Hildreth family.