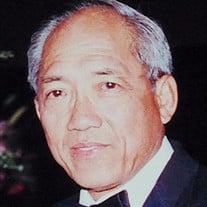 Paterno Riego Marquez, MD, 93, died peacefully in his sleep on the morning of February 4, 2022, in Rocky Mount, NC, with his family by his side. He was born in Tacloban, Leyte, Philippines, the son of a prominent family in his hometown of Tacloban. He earned his medical degree in 1955 from the University of Santo Tomas in Manila, the oldest university in Asia. He interned in Yonkers, NY, and served his residency in Reading, Pa. He served as a captain and head surgeon of his medical team in the Philippine Army on the U.S. side during the Vietnam War. He was in private practice for family medicine in Clifton, NJ; Lisbon, ND; and in Rocky Mount, NC. “Doc” or “Dr. Pat” as he was affectionately known by his friends and patients, lived a long and full life. During his 44-year career as a doctor, he was a passionate advocate for military veterans, and it was his joy to serve as a physician at the Carl Vinson Veterans Administration in Dublin, Ga, for nine years before his retirement in 1999. He was a member of the American Medical Association, Georgia Medical Society, North Carolina Medical Society, North Carolina Academy of Family Practice, and the Philippine Medical Society. He was also a member of Shriners International. In 1956, he married his childhood sweetheart, Lourdes R. Marquez. They traveled all over the world, but home was always where they settled to raise their three daughters. They were involved in the Catholic Church, and he served as a member of the Knights of Columbus. He was a prolific artist and was versatile in oil, watercolor, and acrylic paints, filling up his family's homes with beautiful portrait paintings and paintings of the lush Philippine countryside. Family members would also always find him in his office or at the kitchen table during his free time sketching pages full of landscapes in pencil, pen, or charcoal, and depicting mountains, rivers, and rural huts of his beloved Philippines. He was active in tennis, golf, downhill skiing, diving, and bowling throughout his life. He was predeceased by his parents, Dr. Felicito (Felix) and Consuelo (née Riego de Dios) Marquez, and his older brother Felicito (Felix) Marquez, Jr. He is survived by his children, Anna Marquez Cook (G.R.), Mini Marquez Hart (Mark), and Neda Marquez Roebuck (Jason); and his grandchildren, Daniel, Alexandra, Kelly, and Archer. A celebration of life memorial service will be held on Saturday, February 12, at 2 p.m., at Our Lady of Perpetual Help Parish at 331 Hammond Street in Rocky Mount, NC.

Paterno Riego Marquez, MD, 93, died peacefully in his sleep on the morning of February 4, 2022, in Rocky Mount, NC, with his family by his side. He was born in Tacloban, Leyte, Philippines, the son of a prominent family in his hometown of Tacloban.... View Obituary & Service Information

The family of Paterno Riego Marquez, MD created this Life Tributes page to make it easy to share your memories.

Paterno Riego Marquez, MD, 93, died peacefully in his sleep on...