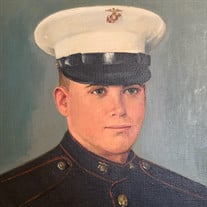 William (Billy) Trenholm Young, 76, passed away Sunday April 24, 2022 at Duke Medical Hospital after a brief illness. He leaves to cherish his memory his loving wife of 53 years Elisabeth (Betsy) Anne Young, his daughter Constance (Connie) Young Kraemer, and his four grandchildren, Oliver Paul Culver, IV, Madison Elisabeth Kraemer, Jake Hayden Kraemer, and Ian William Kraemer. Billy was born on November 29, 1945 in Charleston, South Carolina to Constance Boggs Young and Henry Gourdin Young. He grew up in Orangeburg, South Carolina and graduated From Orangeburg High School. Billy was a veteran of the Vietnam War, serving two tours as a Corporal in the U.S. Marine Corp and earning a National Defense Service Medal, a Vietnam Campaign Medal, a Vietnam Service Medal, and Good Conduct Medal. After his service in Vietnam, Billy enlisted in the U.S. Navy and was stationed in Groton, Connecticut. He served on the USS Lafayette (SSBN-612) and the USS James Monroe (SSBN-622), where he earned his SSBN Patrol Pin with two Bronze and two Silver Stars. After retiring from the U.S. Navy in Charleston, South Carolina as a FTC First Class, he and Besty moved to Rocky Mount, North Carolina where they lived for the past 26 years. As an avid photographer, Billy took pictures throughout his life, and used to develop his own pictures in a dark room he created in the hall closet. He began using digital cameras and would spend his time driving the backroads of eastern North Carolina, taking photos of small towns and wildlife. He recently had an exhibit at the Arts Center in Nashville, where he displayed many of his photographs. Billy loved the Lord, and with his wife Betsy was a member of Kingdom International in Nashville. Billy also was an avid football and basketball fan, loved collecting stamps, and was a voracious reader. He was extremely knowledgeable about antiques and would spend his time exploring antique stores. Billy was the family historian and genealogist and had traced his side of the family back to the 1600s in England. Billy was preceded in death by his parents, his brother Henry (Diney) Young, and his daughter Jennifer Lynne Young. A service will be held at 1:00pm on Saturday April 30, 2022 at Cornerstone Funeral Home with Pastor Daniel Moss officiating.

The family of William Trenholm Young created this Life Tributes page to make it easy to share your memories.

Send flowers to the Young family.