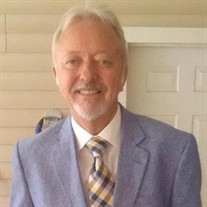 Danny Ray Parker, 71, left this world and stepped into the arms of Jesus on June 15, 2022. He was born December 20, 1950 to Otha and Mamie Parker of Sandy Cross, NC. He will forever be remembered as an adoring Papa, extraordinary Daddy and devoted, loving husband. Danny Ray was known for his angelic voice, his love and appreciation of country blue grass music and incredible sense of humor. Best said, he was a true and honorable man, a friend to so many who leaves a legacy of Faith, Family and heritage for those he leaves behind. He could be found many days tinkering in his building, working on his beloved 49 Ford, watering his flowers and listening to classic country in his Carolina blue man cave. His favorite place to be was seated beside his Betty Sue watching westerns or with the sand beneath his toes, fishing pole in hand. His days were spent on the farm where he was born and raised, the place he cultivated the land and raised a family. He was most proud of his children and grandchildren, bragging to anyone who would listen of their accomplishments, their kindness and his deep and abiding love for them all. He was preceded in death by his parents, Otha and Mamie Parker, his brother Leon Parker and sister Margie Thomas. Those to forever cherish his memory include his sweetheart and bride of almost 49 years, Betty Sue. His adoring children: Daniel Parker (Tiffany), Emily Parker Skinner (Chris) and Susanne Parker Strickland (Glenn) and his precious grandchildren Zachary, Taylor, Jackson, Hunter, Page, Parker and great-grandson Brian. In addition, he leaves his nieces Annette, Teresa, Angie and Amy and their families to remember his laughter and love. The service will be held at 3:00pm on Friday, June 17, 2022 at Christian Fellowship Church. No visitation will be held. Burial will be private. In lieu of flowers, donations can be made to Hospice of Nash General or Christian Adoption Services of Rocky Mount.

Danny Ray Parker, 71, left this world and stepped into the arms of Jesus on June 15, 2022. He was born December 20, 1950 to Otha and Mamie Parker of Sandy Cross, NC. He will forever be remembered as an adoring Papa, extraordinary Daddy and devoted,... View Obituary & Service Information

The family of Danny Ray Parker created this Life Tributes page to make it easy to share your memories.

Danny Ray Parker, 71, left this world and stepped into the arms...

Send flowers to the Parker family.