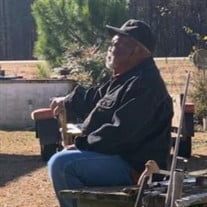 Willie Earl Woolard, or Earl as he was affectionately known to family and friends, peacefully transcended to his creator on February 10, 2022. Earl was born on June 27, 1945 in Nash County, North Carolina as the oldest of six children. Earl married Jerdine Silver on December 24, 1970. This union created one much loved son, a beautiful granddaughter and a precious great-granddaughter, whom they both loved and cherished. Earl was employed with Edwards, Inc. for over 25 years when he retired to take care of his wife. His career was spent as a welder and he often made special heart-felt gifts for his girls.He was an avid hunter and took great pride in his garden, taking care of his flowers and plants and feeding the birds. His yard was always in tip top shape. He also enjoyed fishing, riding motorcycles and telling stories. And what a great storyteller he was. Earl was preceded in death by his wife, Jerdine Woolard; two sisters, Catherine Foster and Patricia Leonard; and two brothers, Warren Woolard and Ronald Woolard. He was ill in the last year of his life, but you would’ve never known it. Days after chemo treatments he could be found tinkering around in his yard, on his lawn mower making sure his yard was straight, sitting on his picnic table laughing with his buddies and having a few beers, cooking on the grill for his family or riding to town to pick up his lottery tickets. This could be a eulogy about a strong mighty oak felled by illness.But it’s not. We could talk about lost battles. But it was never going to be about that. Instead, this is a eulogy about the victory of a life well lived. He leaves to cherish his loving memory: his son, Nakia Woolard and wife,Tracy; a granddaughter, Shantel McCalston; a great-granddaughter, Trinity McCalston; two bonus grandsons, Markel Davis and Trysten Roberson; one sister, Linda Woolard; brother-in-law Anthony Silver; four sisters-in laws Doney Rawlins (William), Mabel Richardson (Charles); Mary Lou Cotton and Tina Arrington (John) ); and a host of nieces, nephews, other relatives and friends. A funeral service will be held Tuesday, February 15, 2022 at 11:00AM in the Chapel of Cornerstone Funeral Home. Burial to follow at Oakland Cemetery.

Willie Earl Woolard, or Earl as he was affectionately known to family and friends, peacefully transcended to his creator on February 10, 2022. Earl was born on June 27, 1945 in Nash County, North Carolina as the oldest of six children. Earl... View Obituary & Service Information

The family of Willie Earl Woolard created this Life Tributes page to make it easy to share your memories.

Willie Earl Woolard, or Earl as he was affectionately known to...

Send flowers to the Woolard family.